The trials that follow were carried out by Étienne Mignot (university student) in the farm of David Guy in Loire-Atlantique (Sky France).

In order to observe the quality of emergence and development of cover crops, different species of plants were sown with a disc seed drill (EasyDrill) immediately after the harvest (on 10th of July 2017) with 3 types of regrowth strategy: high straw (40 cm), crushed short straw (8 cm) and crushed short straw followed by using superficial ploughing (to 5 cm depth). The trials include mustard, pea and buckwheat, which serve as indicators; the other plants, according to their typology, had fairly similar reactions and developments. The choice of these 3 species is justified in the following way: Mustard is an excellent cover crop whose “minimum cover capacity” and good emergence guarantee very good economic result and very good emergence.

Forage pea belongs to legumes that fix nitrogen; it is logically a cover crop that must, in fact, be less sensitive to possible shortcomings in summer after harvest. Buckwheat was finally chosen as cover crop that establishes and grows quickly in summer but also as a commonly used harvested cover crop. In addition, spring and summer were extremely dry in Loire-Atlantique:  9 mm between sowing and first emergence, only 8 mm in the first half of August and 21 mm at the end of the month.

These particular conditions, which, however, correspond more to what the majority of farmers can normally encounter in the area, have certainly enlarged the differences and better highlighted the interest in sowing of cover crops in summer. Unsurprisingly, (see Figure 1), it is the option of “crushed  straw" when the emergence is the weakest, all species confounded, while straw and stubble are equal. This observation confirms the difficulty for a disc to pass / cut a "huge cover" of dry residues just after the harvest. Regrouping of straw in rows is clearly visible.

Crushing the straw is confirmed to be the worst option for cover crops.  On the other hand, the preservation of high stubble shows an interesting solution for direct sowing at this time and in these conditions. 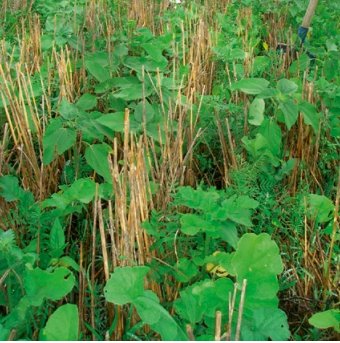 This trial was carried out on a plot using minimization techniques and direct sowing for nearly 15 years aiming at putting seeds to 3 cm depth. Sowing was carried out to improve the quality and a band was left without cover crops to study the emergence dynamics of the regrowth and the emergence of weeds.

As flea beetles attacked the crucifers very early this summer, the height of the straw seems to have confused them (Figure 2). In fact, only 25% of the mustard plants cut high were attacked, while 68% cut short and 85% cut short and ploughed. This observation is supported by the effect of cover crops in the rape: from the moment the plants cover and even hide the rape, certain pests appear. It also reinforces the idea that healthy rape growing fast is much less affected.

A first observation, 3 weeks after sowing, already reveals differences in behaviour. Generally it is supported to have tall straws, whereas it is much more sensitive with crushed straw with or without ploughing. If for crucifers, it is more about stem elongation, the difference is significant in pea production. The “high straw” option proves about 30 leaves with first tendrils, while in the 8 cm stubble the number of leaves drop to 24 and even 20 in the crushed straw. It confirms that the pea appreciates the company,  protection but also support on which it can quickly cling. The difference in height of vegetation is also double for buckwheat in favour of stubble of 40 cm.

Measurements taken 2 weeks later in mid-August reinforce these first observations, with differences that have been accentuated, especially for pea and buckwheat. These differences continue to increase during the observation at the end of August, when the mustard after ploughing is small and did not reach the grain stage.

For this step, the weighing of the aerial parts at the end of August was used as a method of evaluation. Logically, there is a rather significant difference between the individual options as it is proved by observations.

The biomass is almost the same for crushed straw and crushed straw with ploughing and it doubles in case of the "high straw" option as shown in the photo (mustard sown after ploughing in comparison with the high straw option), which is confirmed by weighing. This difference is logically found in the trapped nitrogen with rather large differences despite low trapping levels. These figures prove that the post-harvest nitrogen balance was very low in this parcel and this low level was certainly maintained throughout the summer in dry conditions.

For this legume, the initial delay is conserved and even increased with the right stubble option that comes off with double biomass in late summer. In fact, this trial demonstrates once again that legumes enjoy some free nitrogen or overall fertility during emergence and early growth stages. Once in place, they can begin to compensate by the symbiotic fixation. Thus, if we compare the nitrogen contained in mustard and that in pea, the arithmetic is almost correct. The bacterial symbiosis only doubled what was taken from the soil but not more. However, this is where pea is the most vigorous at the start, and certainly better fed early, the total amount fixed is the largest (about 35 kg in “high straw” option compared to 15 kg after ploughing). Thus, for leguminous plants, the quality of the establishment influences not only biomass but also its capacity to return nitrogen into the soil.

These differences are the same in buckwheat.   It achieves in the best option, “high-cut straw”, the biggest biomass with 2.6 t of DM in about 45 days. This level of production confirms its growth rate in summer and even in dry conditions, which makes it a very competitive plant against many summer dicotyledonous plants such as amaranth and chenopodium. It also confirms its suitability as a second harvest option. On the other hand, the amount of nitrogen trapped is rather intriguing whereas this plant is not a leguminous plant capable of fixing, nor a cruciferous one that is considered very aggressive for soil nitrogen. Buckwheat, however, demonstrates here that it can be very powerful and is able to mobilize or even empty the soil of its fertility even more than other conventional cover crops. It is certainly, and partly for this reason, that buckwheat has a reputation for keeping fields clean.  As its common name of “Black wheat” might suggest, it is not satisfied with "little"; it is simply hyper-aggressive on fertility which allows it to dominate. It is logically for this reason that the cereals which follow it often appreciate a fertilizer; especially in direct sowing. 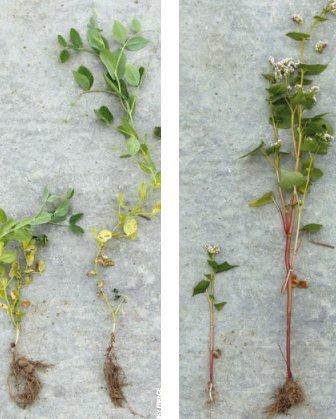 Mustard (28th of August)
except for differences in average height that remain important (36 cm in high straw, 28 cm in short straw and 31 cm after ploughing), this observation proves a strong difference in growth stages. Indeed, the option of high straw proves a leaf surface and biomass much larger than the other two and is very little flowering. This difference in vegetative aspects confirms that in the “high-straw” option the crucifer has developed in much better conditions and with less stress, notably linked to nitrogen, as opposed to the other two.

Pea and buckwheat (28th of August)
as shown in this picture taken during the measurements on 28th of August, even pea, yet belonging to legumes, is rather affected by the stubble height. In the “high straw” option the plants have about 86 leaves on average with a lot of tendrils compared to 54 after ploughing and 48 for “short straw” option. It is as if the advance taken at the start had continued to increase. The difference in vegetation is equally impressive with buckwheat, which reaches the flowering stage. 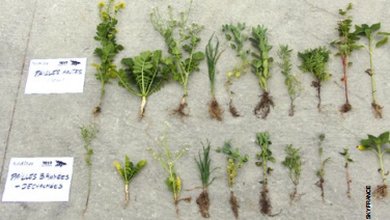 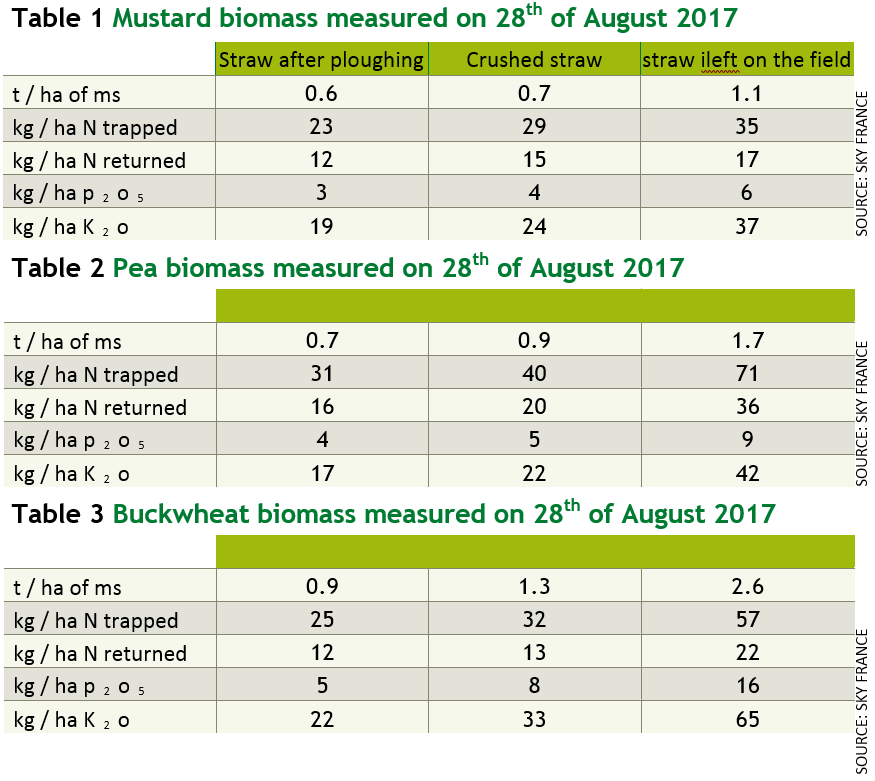 Points to remember and explanations

This trial and especially the weather conditions which followed make it possible to highlight very clearly all issues relating to sowing and establishment of the cover crops in summer:

• The more the straws are cut high, the less they disturb the quality of sowing, especially with a disk drill seeding. This remark highlights the consistency of Shelbourne Stripper in direct sowing method.

• High straw makes shade and, above all, limit the velocity of the wind at ground level, which is one of the major factors of evaporation. In the middle of summer, the heating of the surface is certainly lesser than under a layer of crushed straw.

• Few straws on the ground and high stubble make it easier to value light rainfalls, as was the case this summer (8 mm at first). Although mulch limits evaporation, it takes at least 10 mm of rainfalls to cross this barrier, which functions as a blotter and actually wets the soil. When moisture is scarce, as often happens in summer, it is necessary to limit all the sources of waste and these are finally all these small volumes that make a big difference in terms of establishment and growth. Finally, we have to mention also early fertility and nitrogen. The presence of straw on the ground, even in the form of mulch, will take some of the fertility available in the first cm, the area where the seedlings must settle and start to grow. The situation was even worse in the mulched part: even if the low tillage triggered a slight mineralization rapidly slowed by the dry, the biology attacking the volume of incorporated straw constantly mobilized all the available nitrogen at the expense of cover crops. This is a traditional phenomenon.

For more information on inter-crop nitrogen management, see also: « Combien d’azote  risque d’être mobi- lisé pour la décomposition des pailles ? » (https://agriculture- de-conservation.com/spip.php? page = article-article & article-id = 2186). Thus, the harvesting method strongly influences the availability of early fertility and especially nitrogen for the establishment of cover crops. Here again, high straws at an inappropriate management can lead to failure or even trouble relating to rather fast grain growth. Even legumes that are supposed to do better in these "nitrogen-poor" environments are quite heavily impacted. It is often forgotten that they are self-sufficient in nitrogen for only part of their needs which are, depending on the species, between 50 and 80%. The nitrogen available in the soil is therefore essential at the beginning of growth. Of course, more residues and especially a slight localized fertilization at the time of sowing overcome this major risk too often encountered.

In order to have good cover crops, it is not enough to have the right drill and right mixtures. First and foremost, it is important to learn how to properly manage straw during harvest depending on the conditions of use, equipment and goals. It should also be remembered that  low fertility at the time of establishment is always detrimental even for cover crops that are more likely to suffer from a lack of nitrogen before running out of water as shown very clearly in this trial, while many farmers used to believe the opposite.