The availability of nitrogen and root weed control need to be managed primarily by crop rotation and soil preparation.

In farms having little or no manure, it is particularly important to have a crop rotation that "holds up" over the long term and includes a sufficient proportion of legumes.

If a crop rotation includes several cultivated plants which can transmit identical or related crop rotation diseases, the total quantity of these plants shall not exceed a certain proportion.

The sum of all grain legumes shall not exceed 30 to 35 % (to avoid the risk of "tiredness of legumes").

Alternation of winter and spring crops

If this alternation is done consistently, it avoids the proliferation of certain weeds.

Too frequent corn and spring pea incorporation lead to the proliferation of Chenopodium. Or on heavy soils, if there are only winter crops, foxtail grass will become pervasive.

Limit the proportion of grain legumes

During transition to organic agriculture, farmers often increase the share of legumes in their crop rotations in order to provide nitrogen to different crops. But there are certain limits to respect. According to current knowledge, they shall stick to the following rules:

It is also necessary that the sum of grain legumes in the crop rotation does not exceed certain limits (see above). This helps to prevent the risk of soil tiredness which affects the legumes. This tiredness can result in sharp yield decline caused by disease and pest attacks.

If legumes are included in mixtures of green fertilizers or intercrops it is necessary to choose species that are not strongly related to grain legumes as main crops. For example, if the pea is cultivated as a main crop, it is enough to incorporate only little or no fodder pea in mixtures of intercropping.

(The above text is on pages 4 and 5 of the document. Author: Agricultural Chamber in Picardy (North of the France), March 2012.)

Limit the proportion of cereals 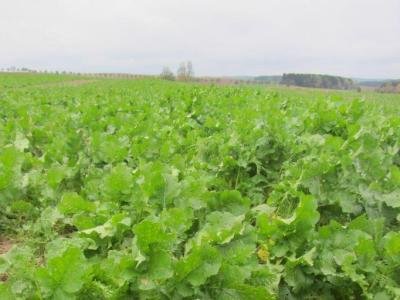 For plant health reasons we shall not have more than 60 % of cereals in the crop rotation. Higher percentages have impact on the yield, quality and health of the plants. The occurrence of Fuarium species and eyespot are symptoms of an excessive proportion of cereals. We shall also consider the degree of relationship between different cereals.

For example, wheat, spelt, Triticum dicoccoides or Triticum araraticum and Triticum monococcum are relatives. These species shall not follow from year to year in the crop rotation. However oats is considered a purifying cereal because it is not directly related to the aforementioned cereals. As for rye, it can return frequently on the same plot (field) without a significant risk of disease.

The temporary grassland is a battery of the crop rotation

The temporary grassland is an engine or a battery of the crop rotation. Thanks to this grassland the soil is full of humus and nitrogen, thus guaranteeing a high yield of crops that will follow. Even on farms without or with little livestock we shall have at least 25 – 30 % of temporary grassland, even if it means a lower yield. If the temporary grassland share is too low, the nitrogen balance of the crop rotation will be negative, the humus content will drop and the fertility of the soil will drop too. An additional negative effect will be the increase of problematic weeds such as thistle, which are normally eliminated by regular cuts.

The temporary grassland of two years has an effect of a sanitizer on thistles even better than a temporary meadow of a year. Maximum 20 -25 % of potatoes, maximum 25 % of sugar beet

The risk of pests (nematodes, wireworms) and diseases determines the maximum percentages. But we must also think about the soil work load if the share of these crops is higher. In addition, crops growing in a row tend to reduce the nitrogen and humic balance of the crop rotation.

It happens often that the water and nutrients are limiting factors to be considered when choosing a crop rotation.

On the other hand, if none of these two elements is limited, it is possible to obtain high yields even on poor quality soils.

Finally, on very clayey soils, high precipitations can cause large declines in yields.

The choice of crops into the crop rotation depends on the following factors:

In organic farming, the advantages of certain crops should not be unilaterally used, but rather take into account the overall crop rotation performance and stability.