Earthworms are the most important animal component of the agricultural land. Nearly 50 species of earthworms are known in the Czech Republic, of which only one third can be found in agrosystems.

The smallest number of earthworms can be found in arable land, where a few dozens of individuals can be found per 1 m2 according to the research conducted in 1994. However, this number can be much higher under permanent grasslands. The importance of earthworms for soil lies primarily in their effect on the decomposition of primary organic matter and the formation of humus. Earthworms are involved in the transformation of complex organic compounds into simple forms that can be used by plants. The transformation takes place in two ways:

Indirectly: by affecting the populations of microorganisms by eliminating their enemies or using their nutrients, influencing soil moisture and aerating, or by pulverizing and transferring plant material. 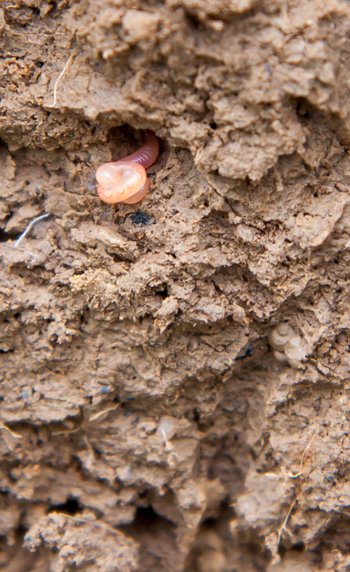 Earthworms have a positive effect on the structure and microstructure of the soil and its fertility, as it has been demonstrated in many studies. This is primarily due to the production of excrements in which mineral particles are mixed with decomposed organic microflora residues. They contribute to soil aeration by creating tunnels. The importance of excrements in the soil is great, as their production is also high and they can therefore significantly affect soil quality. In our conditions, up to 40 – 50 tons per 1 ha is annually deposited on the soil surface, which is a layer that is about 4 – 5 mm high. Their production depends on how favourable the living conditions are for earthworms. In soils with large populations of earthworms, plants produce a much more powerful root system, which is a prerequisite for a sufficient supply of water and nutrients to the plants. The activity of earthworms prevents the formation of a crust on the surface of the soil, thereby helping the emergence of the plants. The presence of earthworms results in increased crop productivity, as well as a reduction in the number of harmful factors (phytopathogenic fungi).

Depending on their species and way of life, earthworms affect the soil in the following ways: 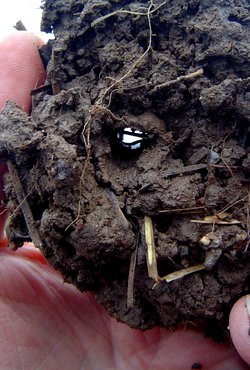 Deep-burrowing earthworms create large several-meter long almost vertical permanent tunnel systems that open up on the soil surface where they feed on dead plant material. These types of soil tunnels significantly affect the water regime in the soil.

Surface earthworms live in waste on the soil surface. However, they are currently of little importance due to the limited accumulation of organic matter caused by the current method of soil cultivation.

Subsurface earthworms live under the soil surface and are part of the arable land. Soils rich in earthworms absorb water better than soils without them, because the vertical tunnels created by the earthworms accelerate the leakage of water into the soil. This makes the soil less susceptible to under flooding during winter and spring, and more water accesses the roots of the plants. Earthworm tunnels increase the soil's resistance to erosion. In heavy soils, the earthworm tunnels are the main space that the plant roots penetrate (40 - 60% of plant roots are in these tunnels). Research has shown that 42% of aerobic nitrogen-fixing microorganisms are located near earthworm tunnels. The number of earthworms depends on the cultivation system. A no-till farming system ensures a greater number of earthworms that are active at night. In general, the more crop residues there are on the surface, the better for the earthworms. In order to increase the number of earthworms, it is not advisable for farmers to immediately switch to a no-till system because there are methods of soil cultivation in which 15 - 30% of plant residues remain on the soil surface during the growing season.

The ESSEX CONSERVATION CLUB in Canada reached the following results in the spring of 1996:

* the type of forest is not indicated

Classic methods of soil cultivation, including deep ploughing, reduce the number of earthworms in the soil due to mechanical injuries, bringing them out to the surface of the soil - prey for predators, disruption of earthworm tunnels during repeated ploughing leads to a substantial reduction in earthworm populations; ploughing changes the temperature and moisture content of the soil as well as the availability of food. The loss of organic matter in the soil causes the most pronounced reduction in earthworms. Shallow ploughing does not reduce the amount of earthworm populations as much as deep ploughing. A no-till method is the most favourable for earthworms. The amount of earthworms in the soil increases if straw is left on the surface of unploughed soil after the harvest. When a no-till method is used for several years, the earthworm population increases up to thirty times, but this population may gradually decrease as the content of organic matter in the soil is a limiting factor. Higher nitrogen mineralization was found in soil where shallow ploughing was used than in soils where conventional cultivation methods (deep ploughing) were used. It has been found that earthworms and plant roots can trigger the decomposition of organic matter as a result of increased microbial activity by releasing exudates into the environment. According to research conducted in Germany, earthworms can greatly reduce the incidence of scab in fruit trees. If there are enough earthworms in the soil, they can pull all the leaves fallen in autumn into the soil so the Venturia inqaequalis fungus (the cause of apple tree scab) cannot reproduce on the fallen leaves, therefore destroying it. The earthworm activity also improves the soil structure. To promote the propagation of earthworms, it is recommended to constantly mulch the area surrounding the trees with cut grass. It is also recommended to cut up freshly cut branches as they are a very suitable substrate for earthworms. Leaves fallen in orchards in autumn should be left in place so they are available to earthworms.